How Did We Get Here: Men Deciding Over Women’s Reproductive Rights? 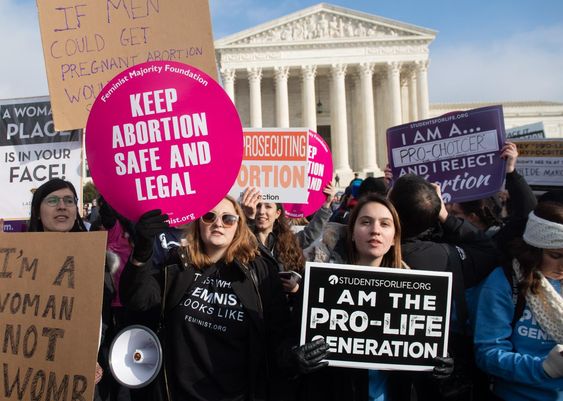 How Did We Get Here: Men Deciding Over Women’s Reproductive Rights?

Nearly 1 in 4 American women get an abortion before the age of 45. However, if you’ve been somewhat paying attention then you should know by now that a lot is about to change. Women’s reproductive rights are hitting the fan as states are rushing to pass insane laws. Alabama state governor, Kay Ivey signed an abortion bill into law that was approved exclusively by 25 white men in the Alabama Senate. The fact that white men are deciding what women should do with their bodies is appalling. A woman’s ability to access comprehensive sexuality education, control her own body, and access the health services she needs – regardless of her sexuality, where she lives, her income level, or her ethnicity is a fundamental right.

Alabama’s bill is the most restrictive abortion law in the country. The legislation amounts to a near-total ban on abortion in the state, forward with the express goal of overturning Roe v. Wade, the Supreme Court case legalizing abortion. Alabama lawmakers join legislators in several other states in putting forth legislation to restrict abortion, such as Georgia’s recent fetal heartbeat bill. A bill that bans abortion when doctors can detect a heartbeat. And now Missouri has also passed a near-total abortion ban.

After a few hours of debate, the Republican-led Senate voted to pass HB 314, which would slap doctors with up to 99 years in prison for performing an abortion. The law only allows exception to avoid a serious health risk to the unborn child’s mother for ectopic pregnancy and if the unborn child has lethal anomaly. An amendment was re-introduced by democrats to exempt rape and incest victims.

Men don’t know what it’s like to be a woman and it shows. The least we can expect from the people making the decisions about our reproductive futures is that they show some kind of understanding and sympathy for the circumstances under which women might need to end a pregnancy. After abortion bans were passed by legislatures in Georgia, Alabama, and Missouri, many women have publicly recounted their own abortions on social media. The idea behind it being that people might be moved to support or fight for abortion rights if they see how common the procedure is, how many people they know, and respect have had one.

However, now women are starting to ask men to share their abortion stories, too. In response, some men have been tweeting about abortions in their own past. Some good may come from getting men to recognize their personal investment in abortion rights, even if they don’t share it out loud. They may reach family members or friends who think they don’t know anyone who’s been involved in an abortion, which could help normalize that reproductive freedom is essential to society.

Who Will This Bill Affect the Most?

The heartbeat bill will go into effect in January 2020 unless it gets held up in court. Young people including youth of color and those living in poverty will be the most impacted. Young people are least likely to recognize signs of early pregnancy, and many do not have the resources to travel to a more humane state. Georgia’s new ban means that a woman could potentially face life imprisonment or the death penalty for it, although the bill doesn’t specifically deal with punishments. It also means that even women who have miscarriages could fall under suspicion. If you miscarry, the state will now be able to investigate whether it was because you were on drugs, or whether you ordered an abortion pill online.

What You Can Do to Help?

Call or write your state elected officials to express your opposition for unconstitutional abortion bans, if you want to speak for your reproductive rights. You can also sign Planned Parenthood’s petition to stop all six-week abortion bans, donate to groups that help women access safe, legal abortions in Southern states like Alabama and Georgia.