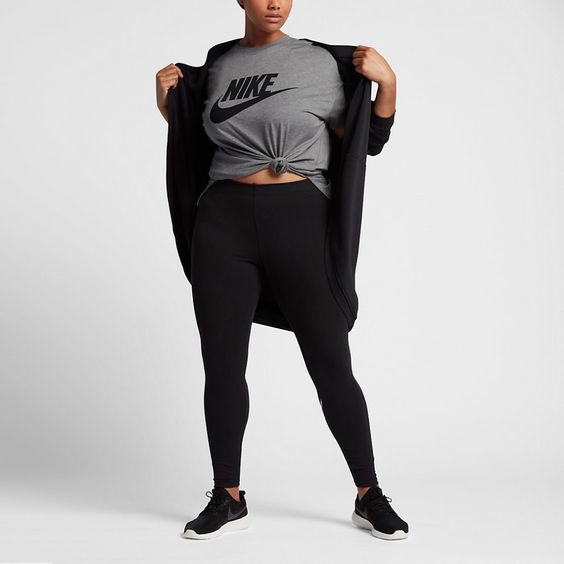 Nike is one of the first sportswear brands to introduce “plus-size” mannequins at its flagship London store. The brand said the decision was designed to celebrate the diversity and inclusivity of sport. Initially, the big move was viewed as a big step forward for inclusivity in sportswear, but it didn’t take long for critics to find something negative to say about the retailer’s decision. The mannequins are displayed wearing black crop tops and leggings, this has resulted in some claiming that their presence celebrates obesity and promotes a dangerous lie. The idea that few plus-size mannequins represent a threat to our health is not only ridiculous, but it fails to acknowledge the ideal represented by the mannequins we have considered “normal”.

What is actually considered “normal” anymore?

The average American woman is 5 feet 3.5 inches tall, and weighs 170.5 pounds, which are the dimensions used on the plus-size mannequins. We’ve grown accustomed to the typical size mannequins as being normal in the same way we have with Barbie dolls and Disney princesses with small waists. The Guardian states that female mannequins are typically 6 feet tall, with a 24-inch waist. According to research done by the Journal of Eating Disorders, real women with the same proportions as a “normal” female mannequin would be so thin that it could cause possible health risks, such as osteoporosis, anemia, decreased immune function, and increased complications after surgery.

The message the “normal” mannequins convey

The message that these underweight mannequins have been sending to women for many years is that you must be extremely thin in order to look good in clothes or be considered attractive. This not only puts pressure on many women who will often find unhealthy ways to lose weight, but it also has a huge impact on their self-esteem and body image. When sportwear shops have these thin mannequins that are considered “normal”, they’re implying that to play sports or go to the gym, you should most likely be underweight already. The idea that thinness is a necessity can add anxiety around certain activities and spaces, like gyms, which some women already find intimidating.  This might not be helpful to anyone on fitness journey, instead they may put off trying to exercise.

Diverse Mannequins is a step closer

About 68% of American women are a size 14 or over, yet many retailers don’t stock larger sizes at all. This is an issue that many plus-size women take offense to, such alienation leads to terrible business for many retailers. With the inclusion of more diverse mannequins, Nike is representing a far more realistic and representative model of the female population, making exercise look more accessible. People of all shapes, sizes, abilities and ages should be able to see themselves represented in shops, not only is it valuable but it’s necessary. Brands should start embracing the idea that human bodies come in all shapes and sizes.