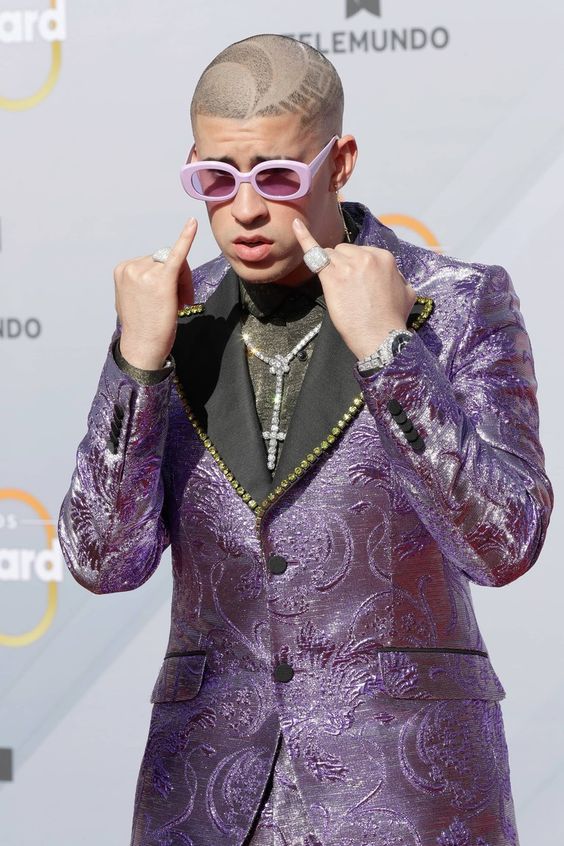 Puerto Rican trap artist Bad Bunny has been causing quite the controversy for provoking audiences in Latin America and beyond with his predilection for painted nails, bright colors, short-shorts and rose-tinted sunglasses. In an Instagram post from March 8, 25-year-old, Benito Antonio Martinez Ocasio photographed his manicured hands against a turquoise swimming pool, his fingernails painted in an iridescent hue. This post got more than 1 million-plus like and more than 24,000 comments – most of them in Spanish – from his 15.9 million followers, ranging from the celebratory (“Bad Bunny is a while MOOOOOD”) to the homophobic and disapproving (“You’re helping the youth distort their minds and go against what God has created.”)

You can catch Bad Bunny’s most memorable looks on YouTube. In his music video, “Si Tu Novio Te Deja Sola”, a collaboration with Colombian reggaeton singer J Balvin, Bad Bunny wore an all-pink ensemble and matching sunglasses as he rapped to the camera with two iguanas perched on his shoulder. In his music video for “Estamos Bien”, he paints his own fingernails a deep purple and blows them dry while wearing a denim jacket from Louis Vuitton’s Supreme collaboration. But his recent music video for “Caro” is the most transgressive. In it, he sits in a pastel-blue room surrounded by pink furniture and décor as a woman paints his nails. As he thanks her, he is transformed into a young woman with a shaved head, who impersonates him for most of the video. When Bad Bunny’s male form reappears, the two of them sit across from each other in similar dress, playing hand games and, eventually, kissing.

Why is this such a big deal for some of Bad Bunny’s audience who strongly disapprove? Because they are framed within a Latin American tradition of masculinity, where men are often taught from a young age to avoid anything even slightly feminine, Bad Bunny’s sartorial risks are significant and breaking all barriers to a new era of masculinity. Latin communities have always had the same ideologies around gender roles. From the time that they are young boys, to when they become men, guys are told what it means to be masculine. Men are told to be strong. Latin families fear the idea of their son showing any signs of femininity. The reason being deeply rooted homophobia, but also because they don’t want their sons to be seen as weak. By embracing any form of femininity, they are going against Latin culture that has been passed down through generations.

Bad Bunny has been known to embrace the femininity that all men carry within and he’s sending a powerful message to all things related to equality and gender. Fashion can be challenging with a lot of set expectations due to Latin stereotypes of masculinity, but Bad Bunny is proving otherwise. Bad Bunny’s diverse style of bold patterned shirts, gold chains and general flamboyance can be traced back decades to Puerto Rico’s salsa and boogaloo scenes.

What Makes Him Different?

Though many might be quick to make comparisons to rappers like Future or even Migos, Bad Bunny’s rhythmic cadence give him a singular sound within the trap world. And what sets him apart is his ability to push the rap form in ways that redefine masculinity within the genre. His music is both rapper boasting and emotional vulnerability. His lyrics reveal his fight against depression and mental illness. Bad Bunny is also transparent about not being insusceptible to the insecurities that come with flaunting his flamboyant aesthetic in a still homophobic genre. Another thing that sets him apart is his willingness to address many of the issues other rappers seem to steer away from. Bad Bunny is paving a new way to a cultural transformation.