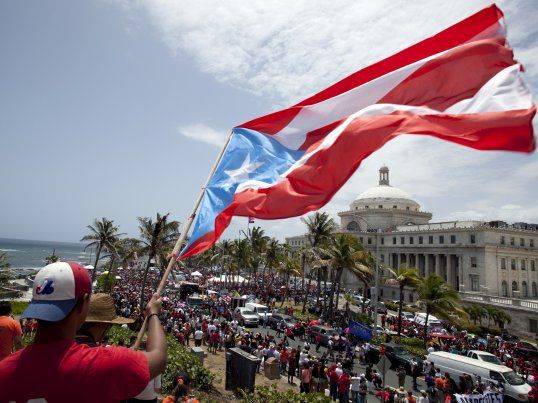 Puerto Rican residents gathered in the commonwealth capital of San Juan on Wednesday to demand the resignation of Gov. Ricardo Rossello. Demonstrators of every age group said they were fed up with the corruption of elected officials while waving Puerto Rican flags – some in black and gray to signal their discontent with the government – and chanting demands that Rossello step down. During a Monday protest that drew hundreds to the same cobblestone streets in Old San Juan, some police officers were injured and several people were arrested.

The crowd included pop star Ricky Martin and reggaeton artists Bad Bunny and Residente. “Puerto Rico has suffered so much and we can’t deal with the cynicism of these leaders anymore,” Martin said in a video message posted online. “Enough already. Enough already.” Residente released a song online Wednesday calling for the people to take to the streets in the midst of the island territory’s political crisis.

What Lead to the Protests?

Backlash intensified after 889 pages of messages from a private chat between Rossello and several other members of his administration were leaked. The messages contained profane, sexist and homophobic comments directed at other elected officials. Some included jokes about deaths suffered after Hurricane Maria. This came as no surprise to Puerto Ricans who have long criticized Rossello’s handling of Hurricane Maria, and the bankrupt island’s recovery from the worst financial crisis in history. Days before the messages were leaked, several former officials – including the former education secretary – and contractors were arrested as part of an FBI corruption probe.

As thousands took to the streets calling for Rossello’s resignation, demonstration against the governor turned violent. Thousands of demonstrators clashed with riot police and at least one protester lit a Molotov cocktail. Officers decided to go on the offensive, firing tear gas and pushing the crowd to disperse them – after fireworks went off behind police barricade.

The Outcome Since the Leaked Messages

In the wake of the scandal, a number of senior members of the administration have already resigned. Rossello claims he has not committed any illegal acts but is sorry for his inappropriate words in the messages. But calls for his resignation continue to escalate. In a statement the governor’s office released a statement that Rossello has handed over any evidence he has of corruption to the proper authorities. The 12 people involved in the leaked chat, including Rossello have been ordered to deliver their cell phones for inspection to Puerto Rico’s Department of Justice.